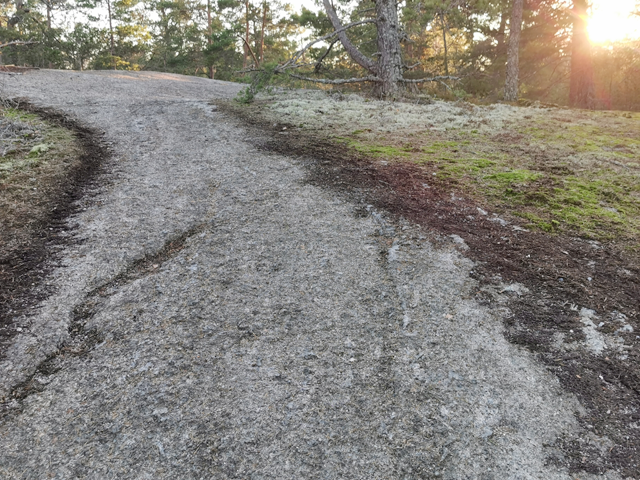 MTB and trail cycling is an issue shared by visitors to Hellasgården.

Another way to get out into nature and get moving, say advocates.

The cyclists are destroying the forest and making a mess of new paths, and it's unpleasant when they pass runners and pedestrians at high speed, say opponents.

We at Hellasgården have seen MTB interest grow stronger over the last couple of decades.

We who with owners', the various Hellas associations, the trust runs Hellasgården have never wanted or thought that cyclists will stop cycling in the reserve.

But we would like to help ensure that this happens in as orderly a manner as possible, and that the footprint on the terrain is limited.

For a number of years, we have followed with great interest how the City of Stockholm has worked on the issue of a sanctioned and official cycle path in the reserve.

Last year, a thorough investigation - Cycling study Nackareservatet by Ekogruppen - is ready and recent signals from the City of Stockholm give us hope that the cycling trail, which will invite path cycling from Hammarby Sjöstad, Hammarbyhöjden, Björkhagen, Kärrtorp, Bagarmossen and Skarpnäck and pass through Hellasgården, among other places, can be completed this year already.

We have visitors who want to experience nature from the saddle of a bicycle, without having to buy a bicycle or bring their bicycle here.

These include families, groups of friends, individuals, companies and schools. But also about tourists in Stockholm and the surrounding area.

We hope that fewer new paths will be created

As we open MTB rental, the interest in trail cycling has been so long and so great that the terrain is already clearly influenced by cycling.

See below images from the terrain in early March this year, as well as sections of the Nackareservat map from the 2014 and 2018 revisions. The trails that have been added are almost entirely due to bicycles.

We hope that the official cycle path will soon be implemented and that this, together with the existing path cycling opportunities, will reduce the number of new paths created.

In our MTB rental service, we refer our guests, while waiting for the official cycling trail, to the possibilities of cycling on gravel roads and large and small paths on the Erstavik side, as well as to the trail that has traditionally been called the Cycling Trail, which starts and ends at Hellasgården. This trail is also included on the latest revision of the Nackareservat map.

On this former moss-covered clearing, cycling has caused the moss to disappear and the rock to be exposed.

The 2014 Nackareservat map did not include this trail, but it did when it was revised four years later. See map section below. Section from map revised 2018. A path has been added in the yellow area, see picture above. Tracks often widen where water collects, as cyclists like to find a dry passage beside the water, Another mountain slope that has seen the light of day. The bark of the trees has also been affected. Double paths have been created here to facilitate overtaking and meetings.

The Nacka map group, which continuously revises the orientation map of the Nacka Reserve, has noticed the increasing number of trails. Map section south of Hellasgården from 2014.